Code Refactoring Best Practises: When & Why to Modernize Software

What is code refactoring and how is it important for your software project? Read the article to find out the best practices and techniques.

Why is refactoring your code important?

Let’s imagine you are going to release your product and you are almost there: just adding one more function before delivering the ultimate product. Naturally, sometimes developers don’t have time to create well-designed and clean code trying to meet business deadlines and goals. As a result, certain functionalities are added in a haphazard way in order to hit a deliverable or a deadline.

The scenario unfolds as follows: product launch is successful, everything works smoothly, however, an extra development work looms in the near future. Why is that, you will ask? Because a solution released under tight deadlines when code is implemented in a fast fashion contains code that is redundant and poorly designed.

Note: With clean code, it is much easier to implement future iterations and innovations and scale the software product.

Here we talk about technical debt which means a middle ground/ balance between a perfectly developed product and tight deadlines required for the product launch. This tradeoff prevents developers from creating clean and organized codes which leads to temporarily speeding up without writing necessary tests for new features or functionality. Eventually, delayed refactoring is one of the reasons for technical debt. In our article, we are going to take a deep dive into code refactoring as a way to reduce technical debt.

So what is code refactoring?

Code refactoring is defined as a technique to restructure and clean up an existing body of code without altering the function of the code (or external behavior) at all. It is also one of the common legacy software modernization approaches. The main goal of code refactoring lies in reducing technical costs by timely cleaning up the code while preserving its functionality. Among the basic purposes are: enhance code readability; reduce complexity; improve source code’s maintainability; improve extensibility; enhance performance; facilitate fast program execution. 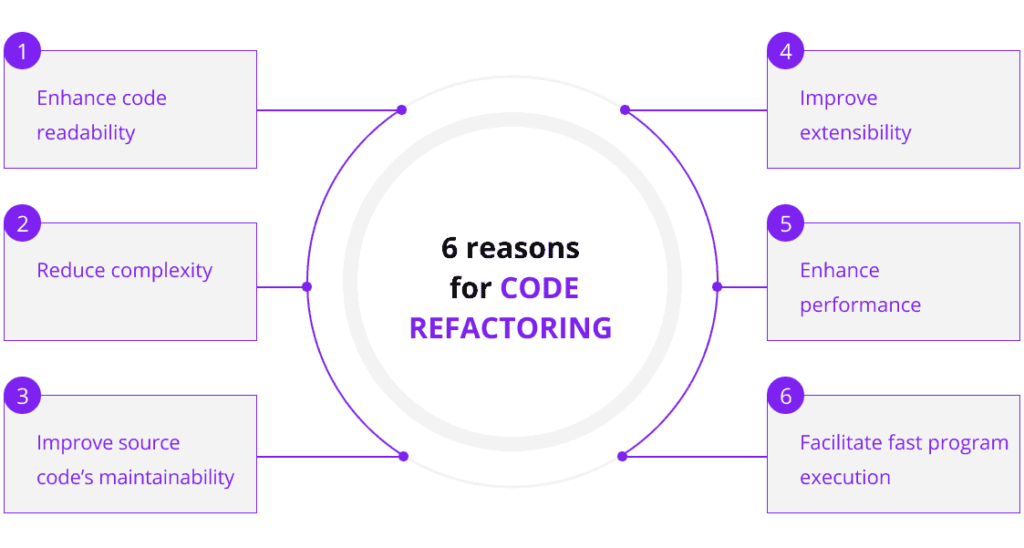 With the refactoring approach, developers apply a standardized basic of micro-refactoring allowing a source code to preserve the external behavior of the software. Since each code transformation is a tiny change, it’s less likely to go wrong and break the code.

Above we have pointed out the main purposes of code refactoring and why it is important for software product development. Let’s delve into the issues and reasons why and when code refactoring is a must-do technique for your product enhancement.

The applications or software always need upgrades and updates to be fully functional and meet customers’ requirements. In order to scale and be on top of the competition, a product has to constantly introduce new features, but if a code is messy and unclean it is impossible to achieve this goal. Therefore, code refactoring facilitates high-quality updates that can significantly help boost sales.

Since code refactoring is executed by small changes called micro-refactorings, the likelihood of errors and bugs in the future is reduced. Moreover, developers can easily implement new functionality to software because there is no need to spend extra time and effort resolving issues and bugs.

After refactoring, code becomes simple which means fewer server capacities and faster system responses when users interact with it. Benefits are obvious for both developers who add new features to the product and end-users whose customer experiences will become better.

Bad code results in a bad user experience, poor architecture, and much more complicated issues as well. Once you launch your product it doesn’t mean that your software is finalized. If the code is left as it is after the product launch, not well-structured and polished, it can take developers some extra time to understand and track it. Here’s when refactoring comes into play. It helps clean up the shortcuts you took in your code to meet the deadlines. So instead of constantly fixing bugs, it is reasonable to refactor the code before it will gradually decelerate your progress every day until you eventually have to pay off the debt by writing tests or rewriting the code altogether.

When do you need refactoring?

Before identifying the project stages when refactoring is required, let’s take a look at the common situations when it is worth doing:

1. The code is hard to read and understand.

For example, if the software product has been developed for years, it is likely that the development team changed, that’s why refactoring will be a good idea to help new team members comprehend the code and help the development process go smoothly.

2. It is necessary to scale.

In order to reduce time when adding new functionality and fix issues that can occur on the way (due to dirty codes), refactor your code. Refactoring can mitigate minor bugs before they become serious problems.

3. If there are duplications of code portions.

If there are duplications of code portions that are frequently used in the software. Refactoring makes future shifts in the code much easier.

So if you are planning to refactor your code, here are the software development stages when conducting code refactoring is most suitable:

So now it is understandable when and at what stages you need to apply code refactoring, but there are still some situations when you DO NOT need to refactor your code. You might be wondering how it is possible if the significance of refactoring is obvious. Let us shed some light on it to get a holistic view:

1. It may be more costly to refactor the code rather than rewrite the code from scratch. Such cases happen when the code is completely unreadable and outdated that is impossible to maintain and extend.

2. If the product has strict market delivery timeframes. Maybe, it seems to be paradoxical (considering the above-mentioned tip to refactor a code at the development stage), but sometimes the refactoring process can take much more time than planned. Thus, it will be wise to postpone refactoring and do it once the deadline is passed.

There are plenty of refactoring techniques available. In this section, we are going to cover the most common ones.

Being one of the most popular methods used for code refactoring, the red-green-refactor process is applied in Agile test-driven development. With this method, refactoring is conducted in the following test-driven cycle: 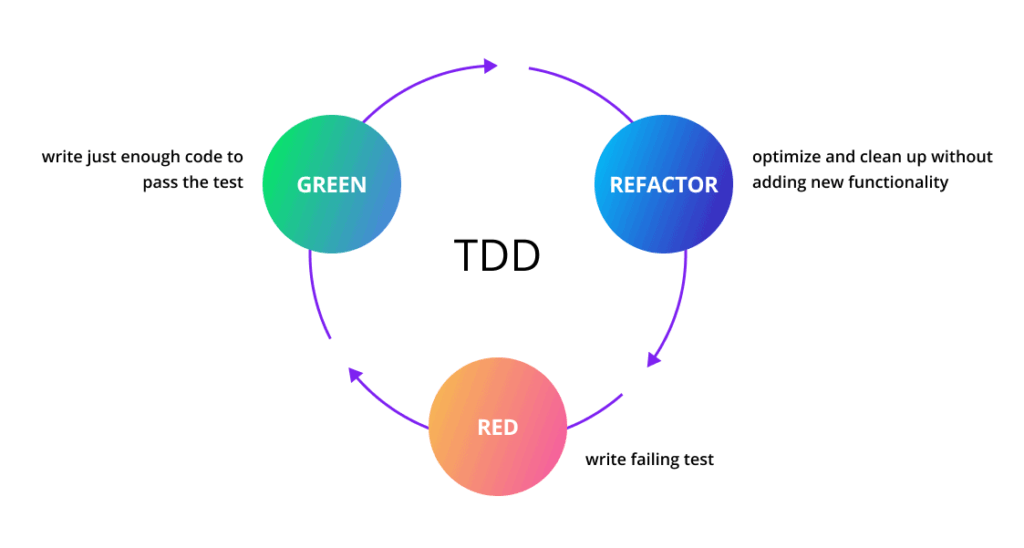 Our developers use this technique primarily to reduce unnecessary duplicates and to cope with a large amount of refactoring by applying class inheritances, hierarchy, extractions.

For instance, one of the methods is the Pull-up field, when code parts are moved into the superclass to eliminate the code duplication. In the Pull-down method, the code is moved down into the subclass. 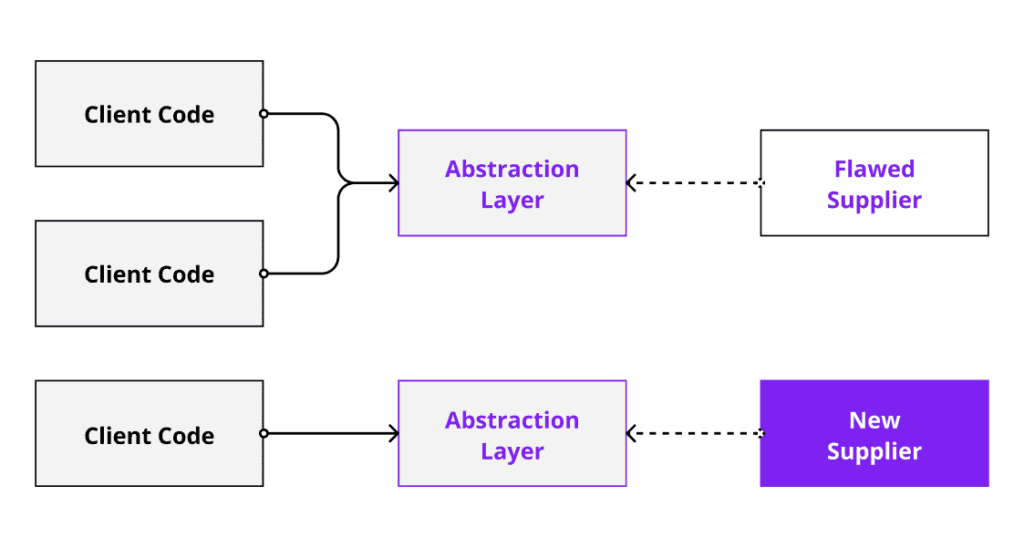 With these techniques, new classes can be created and functionality can be safely moved between classes. For example, if there are no additional responsibilities planned in a class, then you might want to move all features from the class to another one and delete it all together; or when a class is responsible for the work of two, you can create a new class and place the fields responsible for the relevant functionality in it.

It is a common practice when during the development phases developers use excessively long methods which affect the execution logic and consequently make the code hard to comprehend and shift. Therefore, composing method helps streamline methods and eliminate code duplications. Let’s take a look at the two popular composing methods:

Extract method – allows breaking down the code into fragments that can be grouped together. These code fragments are moved to separate methods and are replaced with a call to this method.
Inline method – is used to simplify the code and reduce the number of methods by replacing the call to the methods with the content of the method.

Simplifying Conditional Expressions refactoring handles complex logic in the code which over time becomes complicated and hard to understand. The simplifying method calls make the interaction between classes simpler by improving the interfaces.

In Agile software development, well-factored and clean code is the key to project success. Since maintaining and extending the code from iteration to iteration significantly depends on refactoring, devs need to utilize a step-by-step approach breaking down the refactoring process into smaller chunks along with continuous testing. Let’s take a look at core principles of code refactoring to improve source-code maintainability, reduce complexity, and create a more solid internal architecture.

So do you need your code to be refactored?

Unnecessary clutter in your codebase can be stressful and affect the ultimate project budget. At first glance, it may seem that you can skip refactoring and move further by adding new functionalities to the software product. However, the truth is that with refactoring, the work environment is more productive, and in the long run developers’ efforts and business owners’ investments will be rewarded with an enhanced product and proven customer experience.

Do you still have any questions? Contact our software experts to help you clean up the code or modernize your mission-critical applications to enhance your overall return on investment.

Lyubomyr is a competent IT Professional with 15+ years of experience. He held many executive positions throughout his career and is known as an energetic, effective principal, passionate about helping others achieve their potential. 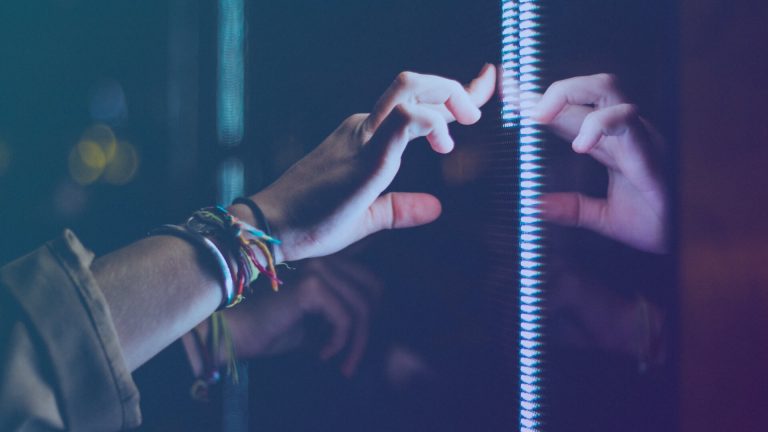 Legacy System Modernization: When and How to Do It Right Read more... 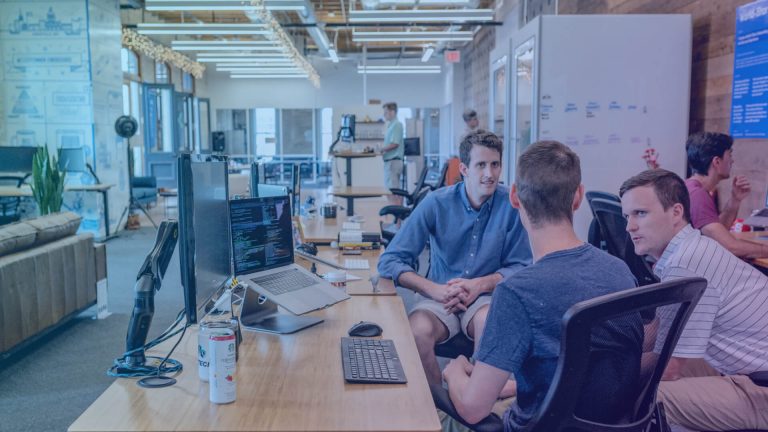 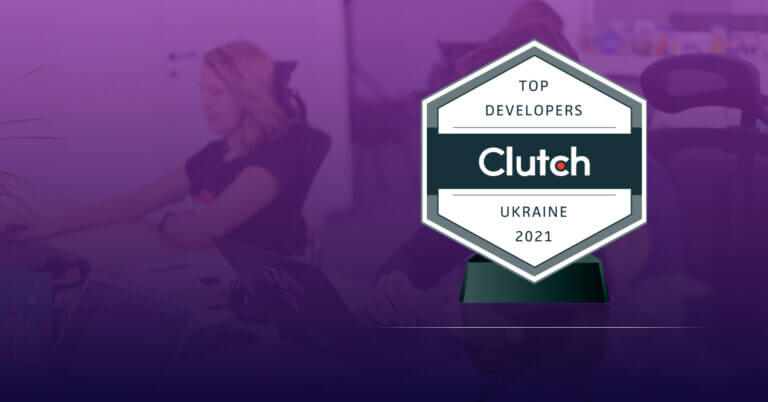 Win The Performance Race: Website Speed and Performance Optimization Guide Read more...
Get your free copy
Thank You!
Get your copy