Why and How to Implement Microservices on AWS

A practical guide on implementing microservices architecture on AWS with examples, benefits, components, and challenges.

They say the old must make way for the new but not everything old is bad. But is that the case with legacy applications that hinder a business’s ability to innovate, pose security threats, and often slow down the overall performance? You probably know where we’re going with this, but let us continue. This article will go over ways to modernize legacy systems and cover the most widely used method – breaking down a monolith into microservices. We’ll describe its characteristics, benefits, challenges, AWS portfolio of products, and finally some tips on how to implement microservices.

The dangers of the legacy systems

Legacy applications are systems that are based on outdated technologies and could have been around in a company for ages. They can no longer be supported by the vendors, it becomes next to impossible to find specialists who could maintain them, maintenance costs eat up all the budget, and most importantly, such systems do not allow adding new features with ease or at all. According to a survey conducted by Accenture Research, 66% of C-level executives would like to replace all of their core legacy systems.

It all can look scary enough for you to feel the urgent need to get rid of your legacy systems now, but we would stop you right there. Because not everything old is bad. Some parts of your legacy application could be kept unchanged, some could be reused or rewritten. It will save the budget and the nerves that come with the total replacement. Just remember that before deciding on how exactly you should deal with your legacy system, it is best to consult technical experts.
Once we’ve established that we are avid supporters of legacy application modernization services, let us tell you the best way to do it.

The best thing you can do with legacy apps without replacing them completely is to modernize them. And there are a variety of ways you can do it: encapsulate, rehost, re-platform, refactor, rearchitect, or rebuild. We’ve covered each of these approaches in detail in our blog post dedicated to legacy system modernization. For the purposes of this article, we would like to touch upon one widely used method in a majority of these approaches – adopting microservices-based architecture.

This brings us to the next topic in our agenda, what are microservices, anyway?

Microservice architecture, or simply microservices, is a cloud-native approach to building an application so that it comprises many smaller services that are loosely coupled, independently deployable, and highly maintainable. Despite being developed and maintained separately from the other microservices, they all communicate over a combination of REST APIs or through events. Each unit is typically owned by independent development teams, which gives more flexibility to the result-oriented development process and makes such an app easier to scale. 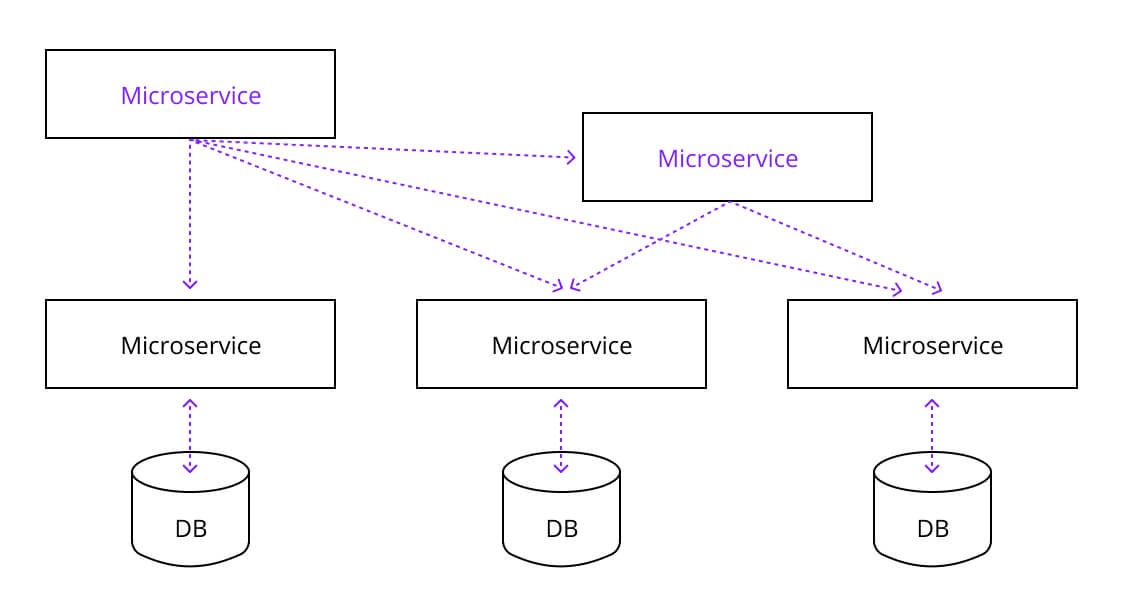 In contrast, monolithic applications are developed linearly as a single unit and are difficult to scale as they require vertical scaling. Why are they called ‘monolithic’? Because the source code for the entire app is built into a single deployment unit like .war or .ear. To scale a monolithic application, developers must increase the whole system’s capacity, disregarding which part of the system is experiencing the most load. Such solutions are self-contained entities.

Many legacy systems were built with a monolithic approach, using a single code base for the whole application. Such an approach was proven to be less agile to innovations because with monolith one cannot introduce new features rapidly and stay on top of the market. To make any changes to the monolithic system, the whole system must be re-built and re-deployed to an updated version.

It comes as no surprise that business owners of monolithic legacy systems are taking a microservices approach. If you’d like to learn more about the pros and cons of using monolith or microservices architecture, read our article.

Simply put, microservices development entails restructured teams and such architecture that is already prepared for failures, future scalability, and adding new features. Scaling or making incremental updates does not require a massive effort. We’ve gathered together the most typical characteristics of microservices and described them below. 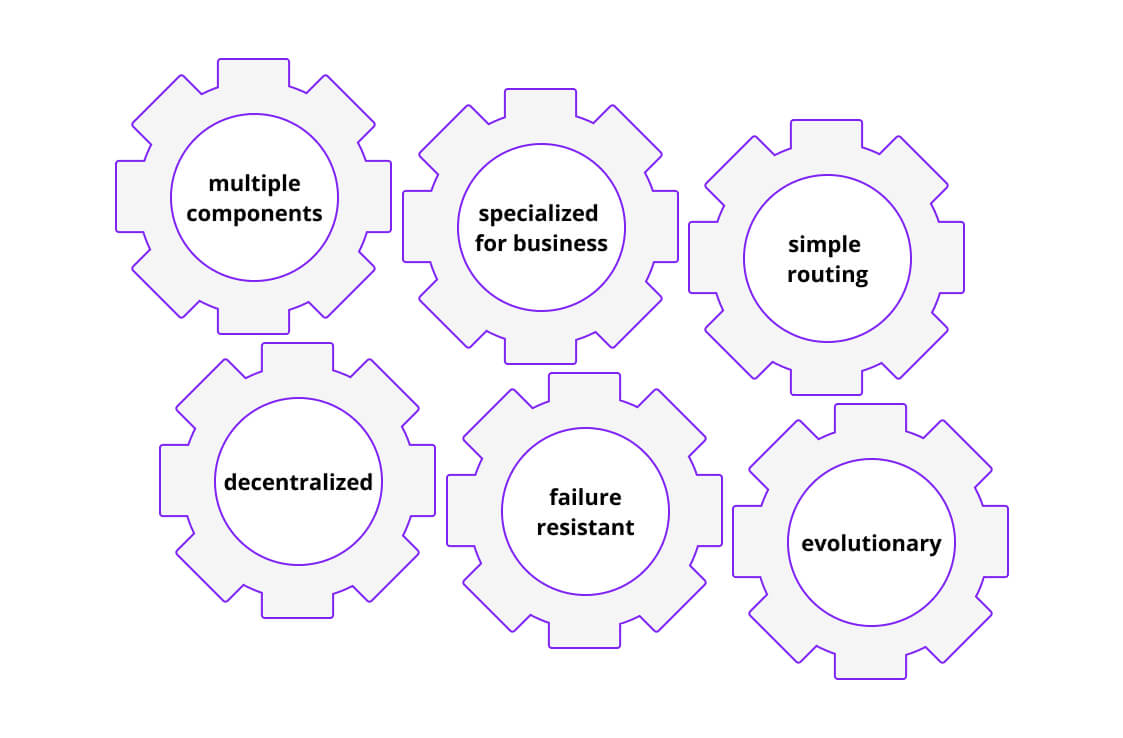 Benefits of using a microservices approach

Due to containerization technology that allows separate software systems to function simultaneously in the same environment, and Docker that helps manage containers, microservices are the foundation for cloud-native applications. Containerization and the power of the cloud combined, offer numerous benefits for businesses that choose to implement microservices.

Ready to break down monolith and build AWS-based app?

We know how to estimate, build and deliver fixed-price projects within agreed terms.

What are AWS Microservices?

The Amazon Web Services portfolio provides a variety of easily integrated building blocks and SDK packages that can help you build any microservice-based application regardless of scale and complexity. AWS cloud platform offers a selection of PaaS, IaaS, and SaaS solutions.

Here are some of the building blocks from the vast AWS portfolio:

Usually, an app is built using different layers: a user interface layer, a business layer, and a persistence layer. Amazon microservices architecture splits functionalities into vertical layers and each is responsible for a certain function.

A typical microservice architecture on AWS

The user interface (UI) is the appearance of display screens, pages, and visual elements like buttons or icons – everything that enables a person’s interaction with the device, product, or service. AWS provides the following services for delivering and storing the contents of the website:

Each microservice should have its data persistence layer to be independently scaled. AWS offers a variety of stores that serve different purposes.

How to implement Microservices on AWS

We’ve covered the types of services offered in AWS portfolio and now let’s talk about how you can begin implementing your microservices on AWS. We’ve put together a rough plan and some tips for you to get some general idea from where to start and what to keep in mind.

Each microservice needs to have its own repository and its own CI/CD pipeline. For this, AWS CodeCommit can be used, as well as any other repository services like BitBucket, GitHub, or GitLab. AWS CodeBuild that builds the code and CodeDeploy that automates software deployment can be used to produce a container – a deployable artifact (i.e. Docker image). Docker images are then pushed to AWS ECR (Docker registry).

The type of microservices interaction depends on the project needs and its domain because microservices communicate differently with each other. Some services can expose REST WebAPI which can be called by different services. The other microservices (the whole system or some parts) can be event-based. In such case, services can produce and react to events happening in other services. To achieve this, you can use AWS SQS message broker. Event-based systems are easily scalable as there are no direct communication between services. All messages are processed by the message broker.

Each service should have its own database which suits its needs. The database is selected according to the project needs and the type of function the microservice performs, which tasks. Some tasks cannot be performed with NoSQL databases and there are tasks not suitable for relational databases. AWS offers Aurora data storage among relational databases and DynamoDB among NoSQL ones. Using AWS Aurora or DynamoDB ensures your data is more available and more protected even in case something happens with the data center. Database technology should also be chosen considering what exactly your microservices are responsible for.

Apart from the above mentioned AWS services, depending on microservice function we can use Load Balancers, Route53 for DNS Rooting or S3 for file storage.

Read the full case study about legacy modernization and migration to AWS cloud.

What are the challenges with microservices? The microservices adoption journey is fraught with challenges and concerns for organizations. There are two types of challenges – technical and general. We will start with general and then review the most common technical problems and how AWS overcomes them.

One of the most common challenges businesses face when adopting a microservices approach is the lack of experienced talent who can define which applications are the best candidates for transition to microservices. Uncertainty around security issues might also be a hurdle. According to a study conducted by IBM, 49% of surveyed IT executives noted insufficient internal expertise in DevOps or agile practices. 50% of them mentioned they are having difficulties integrating cloud and on-premises environments. All these concerns can be mitigated by bringing in the right technological partner.

One of the most obvious technical challenges with microservices architectures is getting containerized services to discover and interact with each other. Amazon ECS comes to the rescue – it now includes integrated service discovery that enables services to easily discover and connect.

During API implementation different versions of APIs need to have backward compatibility. After the API is published, the next challenges arise: managing, monitoring, and monetizing the ecosystem of third-party developers. The developers might also need to know how to throttle requests to protect the backend services, cache API responses, handle request and response transformation, and generate API definitions. AWS with its Amazon API Gateway solves these challenges and makes it easy to create and maintain RESTful APIs.

As you can see, with the skilled talent and carefully selected AWS offerings, the transition to microservices can be a painless and easy process.

Breaking down a monolithic application into microservices and implementing them on AWS requires a lot of knowledge and experience. In our article, we have described characteristics of microservices, their benefits, challenges, and constructed a short guide of AWS portfolio of products to give you a better understanding of what and how you can use. Also, we added some typical flow of how to implement microservices on AWS, along with some tips. We understand that choosing the right microservices and implementing them can be a daunting task, so please remember that our experts are always ready to help you.

Cloud Migration Strategy: How to Choose a Successful One? 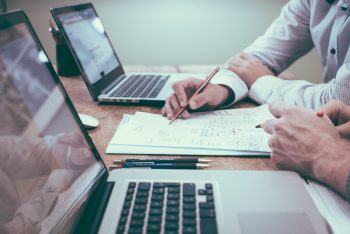 Code Refactoring Best Practises: When & Why to Modernize Software 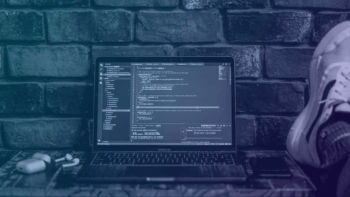 Legacy System Modernization: When and How to Do It Right 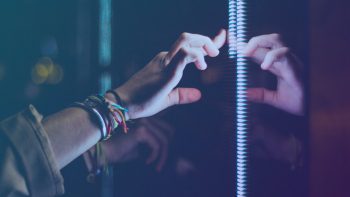 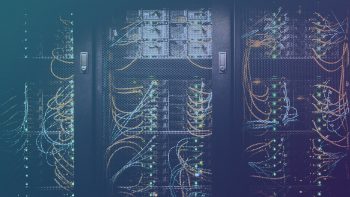